Tendertec Presents the Role of tech in supporting older people 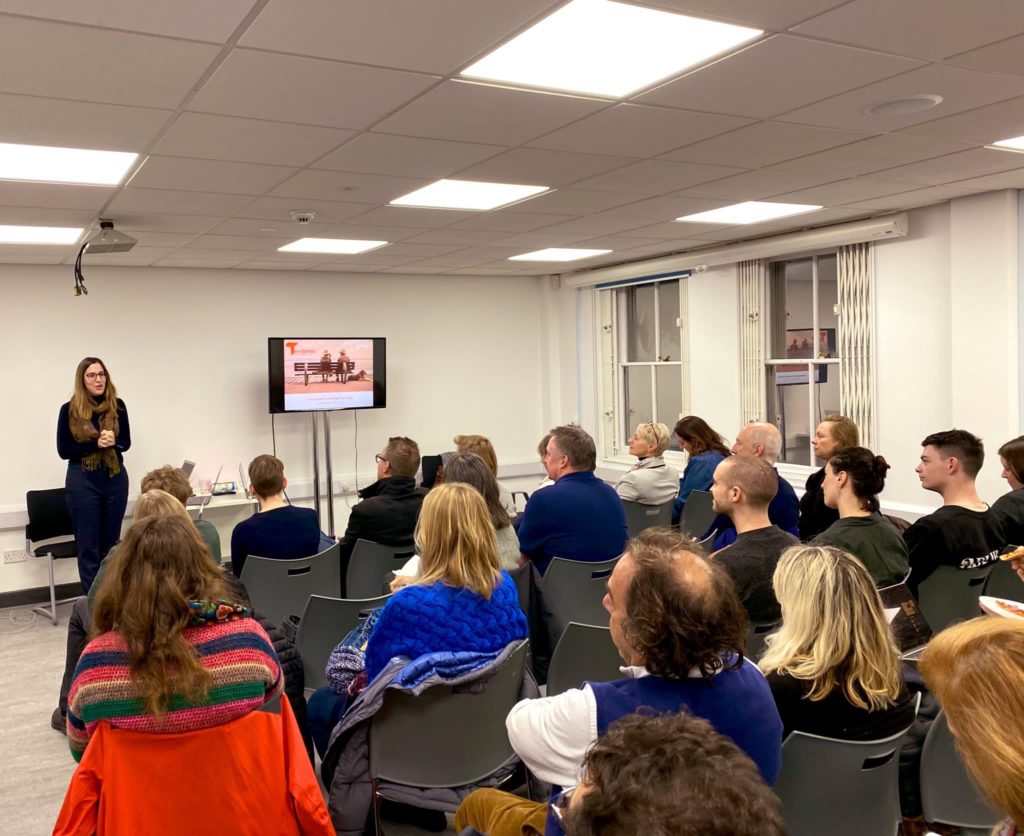 The Netsquared Tech4good South West events drive in the conversation on tech for good, civic tech, the digital empowerment of charities, social organisations and enterprises in Bath, Bristol and across the South West. Taking place in Bath Spa University’s CCCI innovation research space at Palace Yard Mews, it was the first large event to be hosted in the new spot in Bath’s centre.

Speakers were all engaged in the role technology can have in supporting the lives of older people. From Tendertec , an AI-powered tool that creates data-driven personalised and preventative care; UFI Charitable Trust on funding innovative projects for older people and those that widen access to work; Chloe Meineck from Studio Meineck on the importance of co-design in creating impactful tech to assist underserved communities; to Age UK Bristol, where iPad sessions are a place for empowerment for older people.

Afroditi Konidari and her co-founder Rui Zhang from Tendertec came along to outline the findings from a project with Herefordshire Council and Holmer Manor Care Home. Falls are the most frequent (and damaging) accidents among people aged 65 and older, with 1 in 3 older people affected each year. Tendertec are looking to launch their product, but first took their AI-powered tools to Holmer Manor Care Home to show its effectiveness in detecting potential falls in real time.

Afroditi emphasised that, when it comes to preventative care, the information or data that puts care in context is the most important. She called Tendertec’s product the first digital care assistant for seniors, but its focus is personalised tech that adapts to the person its supporting.

Tendertec is made up of a sensor, the mobile app and the Tendertec platform for carers. The tools are supported by algorithms generated by machine learning/AI, and form convincing solutions for preventing falls. Afroditi focused on the contextual data the tool was able to provide;

Tendertec say it is important that there is no surveillance or invasive crossing of boundaries when it comes to retrieving data, and then how that data is used.

The problem in care homes is that once the person is inside the room, that is a private space. So how do you find out if the person is safe, or needs attention or help? This is where non-invasive sensors step in.

Over the course of the trial, the tool detected 10 falls in two weeks. Six of those falls would have not been attended without it. This information can then inform personalised plans for different people with different needs and nighttime routines.

Questions from the rest of us included whether Tendertec were thinking about setting out an ethical framework. Afroditi emphasised that Tendertec are working in an area where there are around two carers for every 30 people and is increasingly in danger of being privatised bit by bit. Tech won’t replace carers; Afroditi would like to see healthcare improved rather than transformed wholesale. Making a sustained effort to look into how and why falls occur, Tendertec have underpinned their product that works around those it is supporting.

Daniel Whiston from UFI Charitable Trust introduced us to its funding initiative specifically focused on innovative uses of technology that enables adults to access and develop the skills they need for work. Daniel focused on the Trust’s upcoming call for projects centred around older people, and the nature of the applications.

He highlighted the way the Trust doesn’t work like many investment funds do, where your contacts, previous experience and background can secure your idea better exposure. Instead, the Trust wants to hear from a diverse pool of people with an impactful idea and a link to their community. If you’re a service worker in the North East rather than someone on their fifth venture, the UFI Charitable Trust wants to hear from you.

The Trust itself has a pot of money, up to £50,000 per project, that it wants to give to ideas that clearly solve a vocational problem. Daniel emphasised that applications that can logically show the nature of the problem will be prioritised, as this the crux of what the Trust then offers: mentorship and advice centred around something that the individual project wholly believes in.

Your problem can be articulated using evidence, data, a simple prototype or a great case study. The Trust has charitable status itself, getting its funding from Learn Direct, and sees itself as a coach that offers critical guidance, consultancy and a wider network, over and above the lump of cash.

Social designer and inventor Chloe Meineck came along and took us through her project centred around older people, people living with dementia, and mental wellbeing. Studio Meineck focuses on transforming people’s lives through design, which means co-designing with the people they’re for, prioritising those from underserved areas of society and tackling complex social issues.

Chloe emphasised designing for the ‘real world’ — if people living with dementia have a different concept of time, memory or timetables, then we need to design products that work with this different reality. Co-designing means firstly understanding intimately the perspectives you’re trying to design for; aids and day clocks can often be out of touch. People living with dementia will have a different relationship to interaction, so Chloe says we must design for that difference.

Chloe works with products that blur the boundary between physical and digital. Music Memory Box is intended to be used by families and care homes. It’s a kit that you can fill together with meaningful objects, music and photographs. By placing a stick on sensor on any object, like a shell for example, can help unlock and recall memories in a simple, tactile way. Like a personal jukebox, you can add more music to the box anytime with a USB stick.

Chloe outlined the feedback and case studies Music Memory Box has generated. Technology doesn’t have to be cutting edge to produce the results that matter — the small, intimate, everyday difference to mood, communication and anxiety levels.

With the South West Creative Technology Network, Chloe is also working on a prototype that links metaphor with tech, providing a framework for men aged between 35–55 in the UK to talk about mental health. Find out more about Trove in this video. This an age group with the highest rate of suicide, as they’re least likely to seek help before a crisis point. Chloe emphasised the need for an alternative to alienating and daunting vocabulary around mental health. Another great example of how tech can support by offering an alternative.

Age UK Bristol’s six week iPad courses were set up to empower older people. Traci Rochester came along to explain the way the course is formed by an ‘engage’ style of training — sessions that include accessible demonstration and co-engagement among the group, with hands-on participation.

The sessions focus on the hardware itself, then the different kinds of ways tech can support and empower. Working through a clear timetable demystifies the devices, and presents clear ways to get used to using tech and firstly, personal devices, such as checking the weather, using it to stay in contact with family and friends, translating and voice assistance.

Traci highlighted that the sessions are about more than gaining skills and learning how to use tech, and immersing people in the digital world they might feel excluded from, the sessions are also an opportunity to get out of the house, socialise, engage with learning and feel a part of something.

Read more about this event at: http://techforgoodsw.org.uk/role-of-tech-in-supporting-older-people/

Any cookies that may not be particularly necessary for the website to function and is used specifically to collect user personal data via analytics, ads, other embedded contents are termed as non-necessary cookies. It is mandatory to procure user consent prior to running these cookies on your website.